Motion is the powerful motion graphics tool that makes it easy to create cinematic 2D, 3D, and 360° titles, fluid transitions, and realistic effects in real time. And with its Metal engine, Motion lets you build and play back effects at incredible speeds. 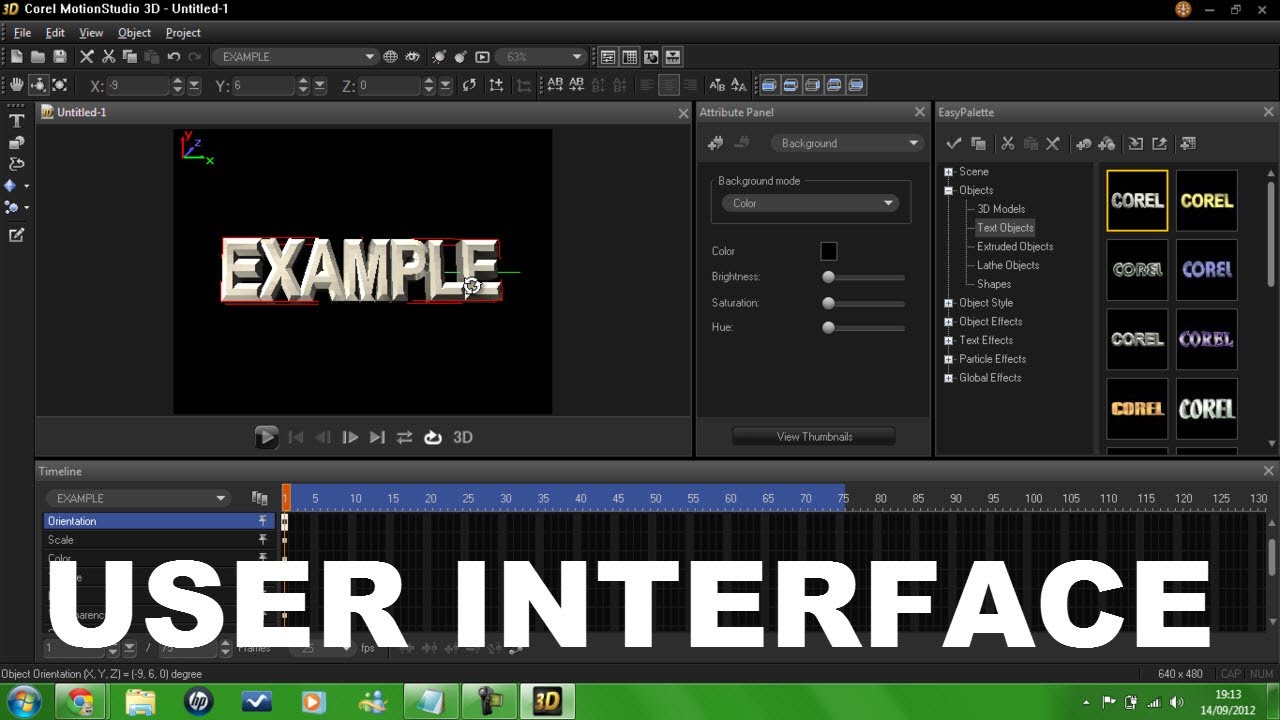 Your graphics in Motion.

Designed with editors in mind, Motion’s streamlined interface and incredible performance lets you create and play back titles, transitions, and effects in real time. Take the guesswork out by seeing your designs without the need to render.

Design in a modern interface that matches the look of Final Cut Pro and puts the focus on your work. Easily locate assets using visual content browsers, then build motion graphics with a logical layers list, full-length timeline, and keyframe editor. It’s simple to customize the interface to match the way you work.

Motion is the best way to build effects for Final Cut Pro projects, including titles, transitions, generators, filters, and more. Save any effect to make it immediately available in Final Cut Pro, where you can apply adjustments right in the video editor. And instantly jump back to Motion at any time for more advanced changes.

Create Smart Motion Templates that include USDZ 3D objects and use them in Final Cut Pro. Publish any parameter to a template, or create rigs that let you control a group of parameters with a simple slider, pop-up menu, or checkbox. If you set up templates with multiple aspect ratios, Final Cut Pro automatically uses the correct layout based on your footage.

Motion boasts an enormous ecosystem of third-party plug-ins and templates that complement the power of the app. Download tools for enhanced tracking and 3D object creation, or choose from thousands of templates with gorgeous titles, transitions, and effects to use as is or customize to fit your project.

With its modern Metal architecture, Motion uses the power of today’s high-performance GPUs to speed up tasks throughout the app and play back motion graphics in real time as you create them. Combine 3D objects, cameras, lights, and emitters with other complex elements, and view your results instantly. And since Motion shares a render engine with Final Cut Pro, you’ll get consistent speed and quality across applications.

Quickly import USDZ 3D models, then easily and precisely adjust their position, rotation, and scale using Behaviors or the Keyframe Editor. For even more stunning results, add cameras to a scene or combine objects with emitters, replicators, cameras, and more.

Easily outline the edges of any video, image, or text element with the Stroke Filter. Create a custom look by choosing from a solid or gradient color, or add multiple strokes using a gradient outline.

Design and create faster than ever before with Motion on the new Mac Pro. Motion takes advantage of all the GPUs in your Mac and uses up to 28 CPU cores in processor-intensive ProRes workflows. Motion is also optimized for the Afterburner card to accelerate ProRes projects, so you can design motion graphics and watch your results instantly in groundbreaking 8K resolution.

Motion features a real-time design engine that lets you see your work immediately, along with a deep set of tools and content for creating and animating complex motion graphics.

Control the timing and position of elements in your animation using intuitive keyframe tools. Use flexible curve interpolation for smooth parameter changes. Draw curves using a freehand tool, or move, stretch, and condense groups of keyframes using the Transform box.

Create natural-looking motion without the need for complex calculations using preset behaviors like Gravity, Throw, and Vortex. Use Text behaviors that animate letters, words, or lines across the screen. Or apply the Overshoot behavior to easily create spring-loaded animations. You can even combine behaviors for more advanced motion animations.

Create high-quality animated backgrounds with built-in generators — each with parameters to customize the look and style of the animation. Choose from a collection of standard shapes or unique designs. All generators can be used as bump maps or textures on other objects — including 3D text.

Easily create beautiful 2D and 3D titles that you can animate with drag-and-drop behaviors and intuitive text animation tools.

Create text using your favorite fonts and adjust its position, opacity, and rotation. Manipulate vector-based characters with pristine sharpness, and apply Text behaviors to add complex word and character animations easily. Motion is built on the CoreText engine, which ensures that glyphs, characters, and emoji render correctly every time.

Build 3D titles from scratch, design them with easy-to-use templates, or instantly convert any existing 2D title to 3D. Customize your 3D text with over 90 Apple-designed organic and artificial materials — or create your own — and see your results instantly. You can even choose from a variety of lighting rigs or create depth-of-field effects to give your titles an ultrarealistic look that matches the environment perfectly.

Quickly animate text on or off the screen by choosing from more than 100 behaviors including Type On, Blur Out, and Text-on-a-Path, which sets your text in motion on a trajectory that angles, bends, or twists. You can also create unique animations by moving letters just where you want them.

With text generators you can automate tasks that would take hours to complete by hand. Count up and down in sequence, change text randomly, add a timecode sequence, and more.

Use Credit Rolls to set up a scroll in just a few steps — even for long lists of production credits. Import a text file or type the credits directly into a Motion project, then use the Scroll behavior to automatically animate the speed of the credits based on your project length.

Just drag and drop to assemble impressive animations, with a choice of more than 200 filters and effects built into Motion. Then fine-tune your work with precise controls.

Use realistic particle systems to create effects including smoke and sparkles — or add dazzling details to any animation. Choose from over 200 particle presets or design your own and see your creations in real time. Or, create stunning geometric patterns in 2D or 3D using replicators. Go to the next level by adding 3D objects to both particle systems and replicators.

Motion suggests the best tracking points so you can quickly create paths to track moving objects in any clip. You can attach images, particles, filters, paint strokes, or the control points of a mask to any tracking path.

Image stabilization lets you smooth a bumpy camera move or lock down a shaky shot, without time‑consuming setup. And SmoothCam eliminates jitters and bumps — so it looks like your footage was shot on a tripod while still retaining camera moves like pans, tilts, and zooms.

Create an accurate chroma key in a single step with the easy drag-and-drop Keying filter. If the green- or blue-screen background in your footage is unevenly lit, you can use advanced controls, including an intuitive color wheel, to fine-tune adjustments. Plus, you can play back the results without needing to render.

Motion features a robust 360 VR motion graphics workflow with real-time visualization for a VR headset, so you can design 360° titles, generators, and filters that perfectly map to your VR scene. Instantly apply those effects to your Final Cut Pro timeline or share to YouTube, Facebook, and Vimeo.

Create 360° titles in 2D and 3D. View them in real time with a VR headset or use the Look Around view to pan across your project in the viewer. 360° titles resize automatically when you move them within your VR scene and can be keyframed to change their look and position over time. Save your work as a 360° Motion template to access it easily in Final Cut Pro.

Design custom 360° graphics or apply bundled effects like 360° blurs, glows, and particle systems to add realism to your VR scene. You can even create 360° generators and place any graphic, still, USDZ 3D object, or video into a 360° project — then reposition and resize to fit.

Create mind-bending effects with 360° video in non-360° projects. Adjust tilt, pan, roll, and field of view for spherical looks and animations. Layout for master bedroom plus bath. Then apply keyframes for perspective-inverting effects that change over time.

Instantly transition from 2D to 3D space by adding a camera or cameras to any 2D project while preserving your 2D groups. Animate and adjust the cameras to create smooth, realistic 3D movement.

Set up point lights and spot lights to cast shadows across objects. Fine-tune shadow appearance by specifying colors and edge types. When you set your elements in motion, shadows animate dynamically with the movement of objects and lights.

Turn any shape, video plane, or paint stroke into a reflective surface. Add blur to soften reflections and use the Falloff feature to fade reflections as the object moves away from the light.

FxPlug is a powerful Apple‑designed plug‑in architecture for filters and effects. Choose from more than 130 built-in FxPlug filters and generators. And explore the thriving ecosystem of third‑party FxPlug effects that work in Motion and Final Cut Pro with custom interfaces and incredible real‑time performance.

Choose from thousands of custom transitions, titles, and motion graphics. Work directly with third-party applications through workflow extensions. Or use third-party tools for advanced tracking, EDL and AAF interchange, and more.

Unleash your creative potential with the Pro Apps Bundle for qualifying college students, teachers, and education institutions. Get all five professional applications for video and music creation at a special price — including Final Cut Pro X, Motion, and Compressor, along with Logic Pro X and MainStage.